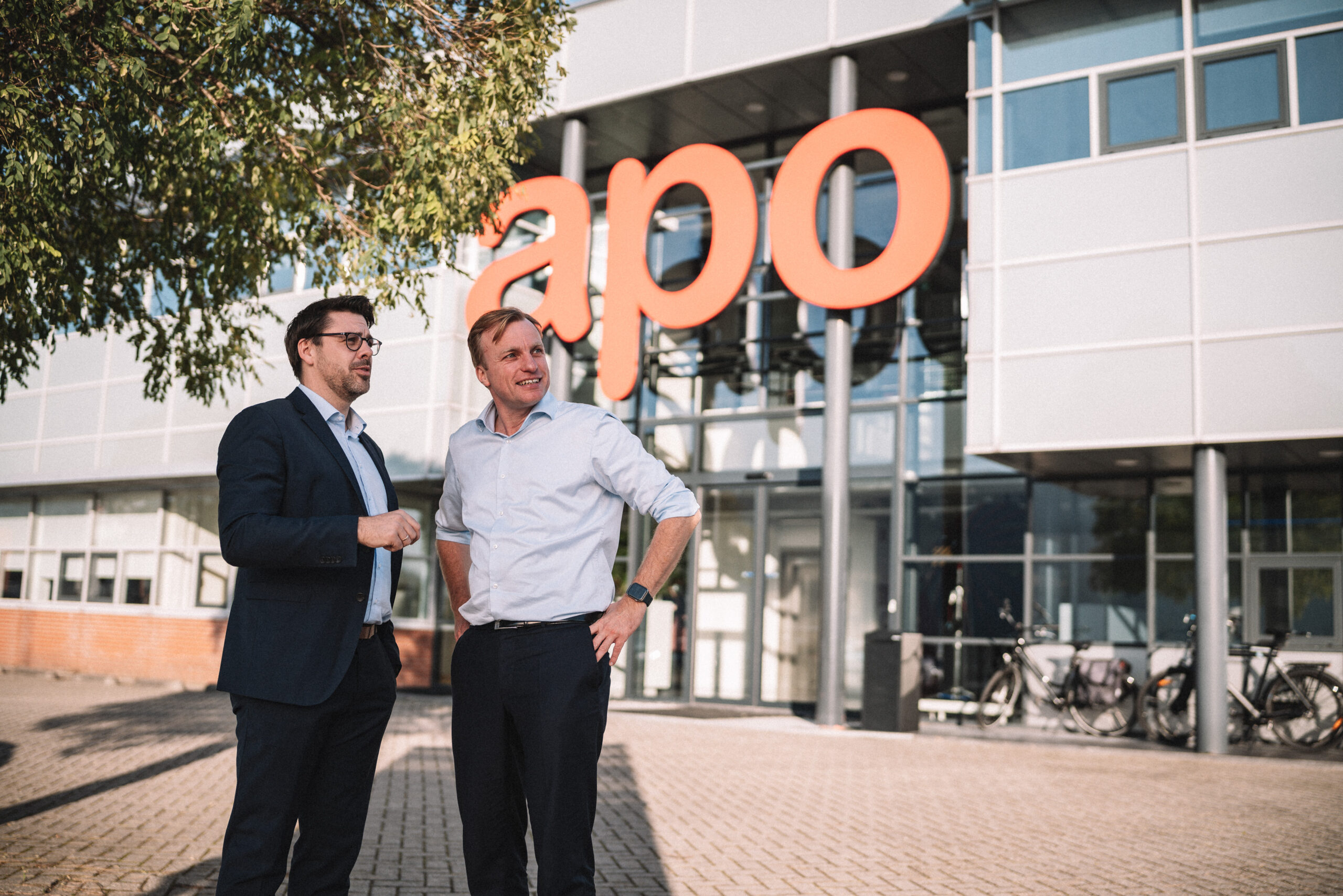 About the apo.com Group
Company history

From bricks-and-mortar pharmacy to healthtech pioneer

The pharmacists Kirsten Fritsch and Michael Fritsch founded the company in 2004. They entered the online business with the self-built online pharmacy apodiscounter. The following year, industrial engineer Dirk Wappler joined the company as co-founder.

The company was renamed the apo.com Group in 2021 and has been led by Dr. Oliver Scheel since then. Almost 350 people work for the apo.com Group, where they contribute to the steady growth of the healthtech company.

Pharmacist Kirsten Fritsch opens her own pharmacy in Leipzig in the mid-1990s. Ten years later, this pharmacy in the Paunsdorf Center forms the basis for today’s apo.com Group.

2004
The company is founded

The Fritsch family registers the apo-discounter.de brand and lays the foundation for what is now Germany’s third-largest online pharmacy. At this point, orders are still being sent out manually from the back office of the pharmacy, with around 50 packages leaving its small storeroom each day.

In March 2005, industrial engineer Dirk Wappler joins the company as Co-Founder. The company also reaches its first milestone: for the first time, over 1,000 parcels are shipped per day.

A year later, after reaching the limits of its capacity, the company moves its online shop operations to Markkleeberg, near Leipzig – the Group’s headquarters to this day.

The first vending machine line is put into operation and cooperations with Amazon and ebay begin. With the online pharmacy apodiscounter.pl, the company enters the European market and ships more than 2,000 parcels a day for the first time.

2010 proves to be a particularly successful year for the marketing team. The company relies on multichannel marketing and begins offering the apo-discounter.de online shop as an iPhone app.

For the first time, more than one million customers a year shop at the Group’s online pharmacies. Customer satisfaction rises above 95 percent.

The company takes an important step towards the top position in pharmaceutical logistics in Europe: Four KNAPP stores enable fully automated picking operations in addition to the existing system.

Investor group THI Deutschland GmbH makes a significant investment in the apo.com Group, enabling it to expand operations into the Netherlands. Duiven is chosen as the second logistics site due to its proximity to the German border and outstanding infrastructure connections.

The new facility in the Dutch town of Duiven opens its doors for the first time. This highly-automated logistics centre with a robot-controlled picking system covering 25,000 sqm facilitates an additional output of 22,000 packages per day.

Dr. Oliver Scheel succeeds company founder Michael Fritsch as CEO. Dr. Scheel, who holds a doctorate in biochemistry, will shape and manage the company’s new strategic direction. This also includes changing the company’s name to the apo.com Group, which coincides with its repositioning as a healthtech company. The Group’s online pharmacies have since been operated by the apo.com Group.

2023
Moving towards a digital future

The e-prescriptions are expected to be introduced in Germany in 2023 and will open up new opportunities. As part of its strategic realignment, the apo.com Group is focusing on the potential offered by electronic prescriptions, which will revolutionise the patient experience. With this in mind, we are aiming to treble revenue within the next four years.

Get on board and shape the future of the online pharmacy market with us!

Your career at the apo.com Group